100 Posters That Changed The World

Classic posters from the last 300 years and the stories behind them. Posters have always been designed to seek an immediate response. From the time when paper was first affordable, the poster has been used to provoke a direct reaction, whether a public appeal, a legal threat, a call to arms, or the offer of entertainment. Newspapers might have the advantage of ubiquity in spreading the word, but a poster could be tightly targeted by its location. Organized chronologically, 100 Posters That Changed the World charts the history of poster design from their earliest forms as a means of information communication to the more subtle visual communication of the 21st century. As printing became cheaper, posters were used for more than just promoting the capture of local villains or announcing government decrees. Advertisements took over, citing up-and-coming events, auctions, public meetings, political rallies, sports games, lectures and theatrical performances. The technological leaps from engraving to aquatints to lithography, chromolithography and the offset press, all had their impact on what could be advertised by poster, and the art form took off spectacularly in the late 19th century with the influence of Lautrec and the Paris nightclubs. From then on, the poster became a sophisticated means of visual communication. In the West it was used to sell products - in the East it was used to sell regimes and control behaviour. Along with historic moments in poster evolution, 100 Posters That Changed the World charts the most impactful designs of the last 300 years - images that communicate a message whether commercial or political, images that sell a film, a musical, a cause or used for decoration, inspiration, motivation and affirmation. The affirmation for teenagers in the 1970s that Farah Fawcett was looking at you. 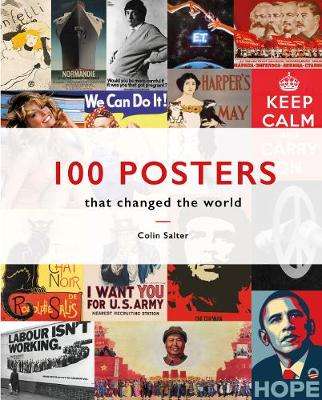 Hardback
100 Posters That Changed The World also appears in these Categories: