A New Ireland: How Europe's Most Conservative Country Became Its Most Liberal

It's not your father's Ireland. Not anymore. A story of modern revolution in Ireland told by the founder of IrishCentral, Irish America Magazine, and the Irish Voice newspaper. In a May 2019 countrywide referendum, Ireland voted overwhelmingly to make abortion legal; three years earlier, it had done the same with same-sex marriage, becoming the only country in the world to pass such a law by universal suffrage. Pope Francis's visit to the country saw protests and a fraction of the emphatic welcome that Pope John Paul's had seen forty years earlier. There have been two female heads of state since 1990, the first two in Ireland's history. Prime Minister Leo Varadkar, an openly gay man of Indian heritage, declared that "a quiet revolution had taken place." It had. For nearly all of its modern history, Ireland was Europe's most conservative country. The Catholic Church was its most powerful institution and held power over all facets of Irish life. As recently as thirty years ago, Ireland was fighting bitterly over allowing condoms to be legal, and the best of the crozier remained a social and political death sentence. But as scandal eroded the Church's hold on Irish life, a new Ireland has flourished. War in the North has ended, with help of President Bill Clinton and his negotiator, George Mitchell. EU membership and an influx of American multinational corporations for tax benefits have helped Ireland weather economic depression and transform from a land of rural cottiers to Europe's headquarters for Apple, Facebook, and Google. With help from prominent Irish and Irish American voices like historian and bestselling author Tim Pat Coogan and the New York Times's Maureen Dowd, A New Ireland tells the story of a modern revolution against all odds. 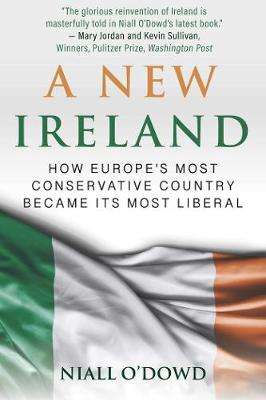 17% offHardback
A New Ireland: How Europe's Most Conservative Country Became Its Most Liberal also appears in these Categories:

Different and the Same: A Folk History of The Protestants of Independent Ireland
Deirdre Nuttall
€25.00