Battle Beasts and fight Evil with Tom and Elenna in the bestselling adventure series for boys and girls aged 7 and up! In Avantia's Northern Mountains, a mysterious local hero claims to have defeated a terrible Beast. But all is not as it seems, and when Tom goes to investigate he makes a startling discovery. The Beast is not dead but hibernating, and could wake up and attack the people at any moment! Back in the City, Tom and Elenna face a mighty showdown against the monstrous Arkano as it hatches out of its stony shell ... will they manage to defeat both the Beast and an old enemy of theirs? If you like Beast Quest, check out Adam Blade's other series: Team Hero, Sea Quest and Beast Quest: New Blood! 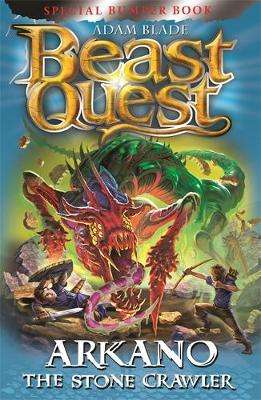 The Worst Class in the World Gets Worse
Joanna Nadin

One Dog and His Boy
Jamie Littler

Over the Moon: The Novelization
Wendy Wan-Long Shang
€8.40

6% off
Adventures of Parsley the Lion
Michael Bond