The phenomenon that is Ted Lasso is not going away any time soon. This super-funny show about an American coach who comes to England to run a Premier League football team has caught the hearts television watchers around the world - as well as the eye of critics and prize-givers worldwide. Perhaps it is the feel-good nature of the show and its timing that has seen it awarded Grammy awards aplenty, as well as many others. But it's more likely that such a funny, sharply scripted, brilliantly delivered comedy of manners, nationality, rationality, relationships and inspiration about someone who is so fundamentally decent and willing to help others, has mass appeal and critical acclaim.

The third series is much anticipated, with Apple TV+ declaring that it will be out in 2022. Believe contains amusing quotes from the show, including many classic one-liners from Ted and the rest of the brilliant cast, as well as fun facts and stats about the actors, characters, writers and producers. Not to mention tea, scones and soccer. So let's quit goofing around and get on with it... Whistle! Whistle!


SAMPLE QUOTE: 'I think I literally have a better understanding of who killed Kennedy than what is offside.' - Ted Lasso
SAMPLE FACT: Ted Lasso first appeared in a series of short NBC Sports promos featuring Jason Sudeikis in 2013. 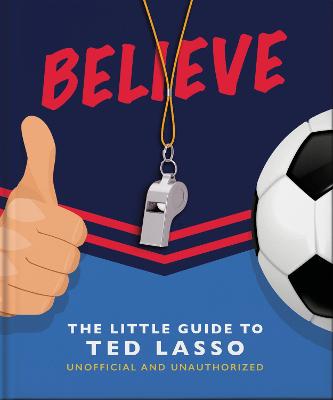 Hardback
Believe - The Little Guide to Ted Lasso also appears in these Categories:

How to be Perfect
Mike Schur
Paperback
€12.50

222 QI Answers to Your Quite Ingenious Questions
QI Elves
Paperback
€11.25

Boris Johnson: The Neverending Tory: The Adventure Where You Take Back Control
Iain Hollingshead
Hardback
€12.50