Andrew Gimson, whose previous book Boris is the essential read on Johnson's earlier career, returns with a penetrating and entertaining new account of Boris Johnson's turbulent time as prime minister, from the highs of a landslide election victory to the lows of his car-crash resignation. In Boris Johnson: The Rise and Fall of a Troublemaker at Number 10, Gimson sets out to discover how a man dismissed as a liar, charlatan and tasteless joke was able, despite being written off more frequently than any other British politician of the twenty-first century, to become prime minister. During his ascent, Johnson benefited from being regarded as a clown, for this meant his opponents failed to take him seriously, while his supporters delighted in his ability to shock and enrage the Establishment. He even changed the language of politics; a new word, 'cakeism', entered the English lexicon to describe his implausible but seductive claim during the Brexit negotiations that it was possible to have one's cake and eat it. In a series of brilliant vignettes, Gimson sheds light on the parts played by sex, greed, boredom and low seriousness in Johnson's rise and fall, describes how Partygate fatally imperilled his prime ministership, and places him in a line of Tory adventurers stretching back to Benjamin Disraeli: disreputable figures who often blew themselves up, but who also could display an astonishing ability to connect with the British public. What kind of a person is Johnson? What kind of a country would dream of making him its prime minister? And why did he fall? Nobody has got closer than Gimson to finding out the answers. 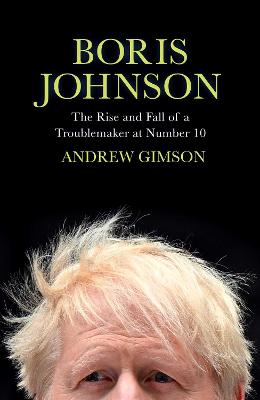