Built on a Lie: The Rise and Fall of Neil Woodford and the Fate of Middle Englan

'Vital financial journalism with heart' Emma Barnett, broadcaster 'Colourful, insightful and pacey' Oliver Shah, business editor of the Sunday Times and bestselling author of Damaged Goods: The Rise and Fall of Sir Philip Green The definitive account of the Neil Woodford scandal from the award-winning FT journalist who first broke the story. This is the gripping tale of Britain's top investor's fall from grace and the shattering consequences. The proud owner of a sprawling GBP14m estate in the Cotswolds, boasting a stable of eventing horses, a fleet of supercars and neighbouring the royal family, Neil Woodford was the most celebrated and successful British investor of his generation. He spent years beating the market; betting against the dot com bubble in the 1990s and the banks before the financial crash in 2008, making blockbuster returns for his investors and earning himself a reputation of 'the man who made Middle England rich'. As famous for his fleet of fast cars and ostentatious mansions, he was the rockstar fund manager that had the lifestyle to match. But, in 2019, after a stream of poorly-judged investments, Woodford's asset management company collapsed, trapping hundreds of thousands of rainy-day savers in his flagship fund and hanging GBP3.6bn in the balance. In Built on a Lie, Financial Times reporter Owen Walker reveals the disastrous failings of Woodford, the greed and opulence at the heart of his operation, the flaws of an industry in thrall to its star performers and the dangers of limited regulation. With exclusive access to Woodford's inner circle, Walker will reveal the full, jaw-dropping story of Europe's biggest investment scandal in a decade. 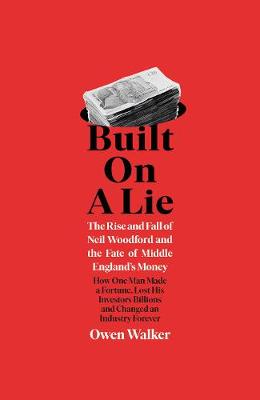 Hardback
Built on a Lie: The Rise and Fall of Neil Woodford and the Fate of Middle Englan also appears in these Categories: