The Battle for Limerick City

The Book Launch for Battle for Limerick City took place on Friday 16th April at 7pm. A great crowd turned up to hear the book launched by Tom Toomey in O'Mahony's Booksellers, 120 O'Connell Street, Limerick.

The full story of the fierce battle between Republican and Provisional Government forces for control of Limerick city in the early days of the Civil War.

The Civil War arrived in Limerick with a whimper rather than a bang. Outnumbered and out-gunned, the pro-Treaty commander of the city, Michael Brennan, negotiated a truce with the Chief-of-Staff of the much stronger anti-Treaty force, Liam Lynch.

The benefit of this lull in fighting accrued almost entirely to the pro-Treaty side. They gained time for reinforcements and weaponry to arrive and when they did, the city became a battleground of extreme viciousness. Several buildings were shelled by 18-pounder guns at point blank range. The fighting around the Strand barracks was particularly heavy.

In this new book on the victory of the Free State troops in Limerick, Pádraig Óg Ó Ruairc offers a fresh perspective on the struggle that reduced the viability of the Republican's hoped for 'Munster Republic' and set the stage for the battle of Kilmallock, which turned the tide of the Civil War in favour of the pro-Treaty forces.

Padraig Og O Ruairc is originally from Co. Clare. His first book was Blood On The Banner: The Republican Struggle in Clare 1913-1923 and his second book is part of the Military History of the Irish Civil War series. He is currently working on a third book on the Anglo-Irish Truce of 1921. 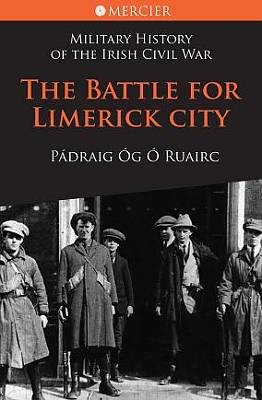 Paperback
The Battle for Limerick City also appears in these Categories:

Once Upon a Road: The History and Times of an Irish Butter Road
Joe Harrington
Paperback
€24.99

The Poster and Other Stories
O'Shaughnessy Denis
Trade Paperback
€18.00