Arora returns to Iceland when her estranged sister goes missing, and her search leads to places she could never have imagined. A chilling, tense thriller - first in a gripping series - from one of Iceland's bestselling authors... **Winner: Best Icelandic Crime Novel of the Year** 'Smart writing with a strongly beating heart' Big Issue ------------------------------ Icelandic sisters Arora and Isafold live in different countries and aren't on speaking terms, but when their mother loses contact with Isafold, Arora reluctantly returns to Iceland to find her sister. But she soon realizes that her sister isn't avoiding her ... she has disappeared, without trace. As she confronts Isafold's abusive, drug-dealing boyfriend Bjoern, and begins to probe her sister's reclusive neighbours - who have their own reasons for staying out of sight - Arora is led into an ever-darker web of intrigue and manipulation. Baffled by the conflicting details of her sister's life, and blinded by the shiveringly bright midnight sun of the Icelandic summer, Arora enlists the help of police officer Daniel, as she tries to track her sister's movements, and begins to tail Bjoern - but she isn't the only one watching... Slick, tense, atmospheric and superbly plotted, Cold as Hell marks the start of a riveting, addictive new series from one of Iceland's bestselling crime writers. ------------------------------ Praise for Lilja Sigurdardottir 'Tough, uncompromising and unsettling' Val McDermid 'Tense and pacey' Guardian 'A tense thriller with a highly unusual plot and interesting characters' The Times 'Deftly plotted' Financial Times 'An emotional suspense rollercoaster on a par with The Firm, as desperate, resourceful, profoundly lovable characters scheme against impossible odds' Alexandra Sokoloff 'Clear your diary. As soon as you begin reading ... you won't be able to stop until the final page' Michael Wood 'A smart, ambitious and hugely satisfying thriller. Striking in its originality and written with all the style and poise of an old hand. Lilja is destined for Scandi super stardom' Eva Dolan 'For a small island, Iceland produces some extraordinary writers, and Lilja is one of the best ... an enthralling tale of love and crime that stays with you long after you have turned the last page' Michael Ridpath 'Zips along, with tension building and building ... thoroughly recommend' James Oswald 'Tense, edgy and delivering more than a few unexpected twists and turns' Sunday Times 'Sharp shocks of chapters hit with increasing energy ... a towering powerhouse of read and I gobbled it up in one intense sitting' LoveReading 'The intricate plot is breathtakingly original, with many twists and turns you never see coming. Thriller of the year' New York Journal of Books 'Taut, gritty and thoroughly absorbing' Booklist 'A stunning addition to the icy-cold crime genre' Foreword Reviews 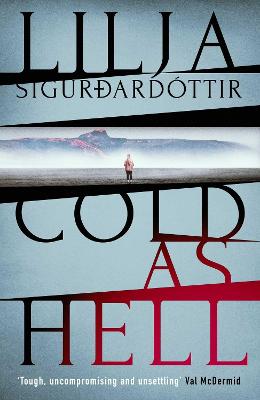 Paperback
Cold as Hell also appears in these Categories: