Crowdfunding the Revolution: The Dail Loan and the Battle for Irish Independence

Can you say whether your bank has an account in the name of a man called Michael Collins?  Alan Bell, official bank inquiry. In 1919, the revolutionary Irish government launches an audacious plan to crowdfund the equivalent of 30,000,000 to fund a counter-state in open defiance of British rule in Ireland. Half the funds are to be raised in Ireland and half in America. This start-up government is determined not only to replace the British administration in Ireland but also to implement its own industrial and financial policies, including establishing a national bank.
But the funding campaign in America is delayed owing to regulatory obstacles. It is imperative that the domestic funding campaign succeeds. Without funds, the counter-state government is doomed to failure. A financial Ho Chi Minh Trail is established; couriers secretly begin distributing three million promotional leaflets throughout the country and carrying subscriptions to Dublin; Head Office staff ensure that receipts are issued, loan registers updated and coded financial accounts maintained. The money is laundered into bank accounts and converted into gold using a gold exchange network.

An uncompromising former detective, now a near-retired magistrate, is summoned to Dublin to go after the money. This is the untold history of the fight for the revolutionary governments funds, the bank inquiry that shook the financial establishment and the first battle in the intelligence war. 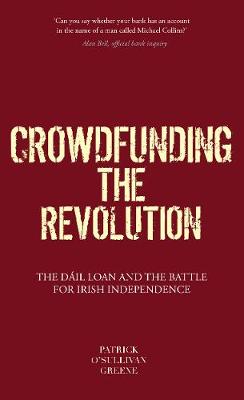 18% offPaperback
Crowdfunding the Revolution: The Dail Loan and the Battle for Irish Independence also appears in these Categories: