Crusaders : An Epic History of the Wars for the Holy Lands

From the bestselling author of The Templars. 'Voyages, battles, sieges and slaughter: Dan Jones's tumultuous and thrilling history of the crusades is one of the best' SUNDAY TIMES. 'A powerful story brilliantly told. Dan Jones writes with pace, wit and insight' HELEN CASTOR. 'A fresh and vibrant account of a conflict that raged across medieval centuries' JONATHAN PHILLIPS. Dan Jones, best-selling chronicler of the Middle Ages, turns his attention to the history of the Crusades - the sequence of religious wars fought between the late eleventh century and late medieval periods, in which armies from European Christian states attempted to wrest the Holy Land from Islamic rule, and which have left an enduring imprint on relations between the Muslim world and the West. From the preaching of the First Crusade by Pope Urban II in 1095 to the loss of the last crusader outpost in the Levant in 1302-03, and from the taking of Jerusalem from the Fatimids in 1099 to the fall of Acre to the Mamluks in 1291, Crusaders tells a tale soaked in Islamic, Christian and Jewish blood, peopled by extraordinary characters, and characterised by both low ambition and high principle. Dan Jones is a master of popular narrative history, with the priceless ability to write page-turning narrative history underpinned by authoritative scholarship. Never before has the era of the Crusades been depicted in such bright and striking colours, or their story told with such gusto. PRAISE FOR THE TEMPLARS: 'A fresh, muscular and compelling history of the ultimate military-religious crusading order, combining sensible scholarship with narrative swagger' SIMON SEBAG MONTEFIORE. 'Dan Jones has created a gripping page-turner out of the dramatic history of the Templars' PHILIPPA GREGORY. 'The story of the Templars, the ultimate holy warriors, is an extraordinary saga of fanaticism, bravery, treachery and betrayal, and in Dan Jones they have a worthy chronicler. The Templars is a wonderful book!' BERNARD CORNWELL. 'Told with all Jones's usual verve and panache, this is a dramatic and gripping tale of courage and stupidity, faith and betrayal' MAIL ON SUNDAY. 'This is another triumphant tale from a historian who writes as addictively as any page-turning novelist' OBSERVER. 'The Templars is exhilarating, epic, sword-swinging history' TLS. 'Jones carries the Templars through the crusades with clarity and verve. This is unabashed narrative history, fast-paced and full of incident ... Jones tells their story extremely well' SUNDAY TIMES. 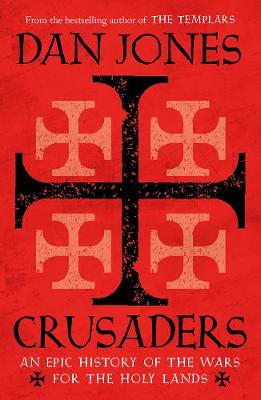 Paperback
Crusaders : An Epic History of the Wars for the Holy Lands also appears in these Categories: