Beside yon straggling fence that skirts the way, With blossomed furze unprofitably gay, There, in his noisy mansion, skill'd to rule, The village master taught his little school Oliver Goldsmith, `The Deserted Village' Schoolhouse ruins are a common sight in the Irish countryside, wherever populations are in decline and the fabric of what was once a vibrant community is slowly perishing. Within their collapsing walls, friends were made and lessons were learned. Belief systems, traditions and moral codes were imprinted on young minds. These schoolhouses had a significant impact on generations of pupils, whether they still live nearby or have emigrated to faraway lands. However, little or no research has been undertaken into the social and cultural significance of these institutions. Only some are recorded in the National Inventory of Architectural Heritage, and they are afforded varying degrees of protection on architectural merit only. Once pivotal to their communities, they now lie abandoned. Enda O'Flaherty's work as an archaeologist has brought him to the most isolated parts of Ireland, where he noticed and grew ever more intrigued by these ubiquitous features of the landscape. He began actively seeking them out, photographing over 240 in total, researching their histories and interviewing those who attended them. In exploring the buildings, he was also collecting a treasury of childhood memories. A former student from the now uninhabited island of Achill Beg recalled a teacher called Mr McNamara who was ahead of his time, using the building in the 1940s as a night school to teach adult islanders to read and write. After setting up a blog to record his discoveries, the compelling material O'Flaherty had uncovered began appearing in national outlets such as The Irish Times and TheJournal.ie, as well as international publications like Lonely Planet and Atlas Obscura. More and more locals came forward to share their stories. Each empty building has a story to tell, and gathered in this thoughtful collection, they whisper a poignant narrative of a disappearing Ireland - of changing needs, desires and ways of life. 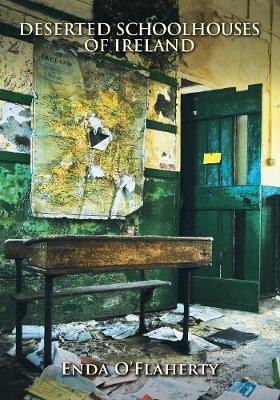 Hardback
Deserted Schoolhouses of Ireland also appears in these Categories:

20% off
The Little Book of the Wild Atlantic Way
Helen Lee
Hardback
€14.99

Irish Customs and Rituals: How Our Ancestors Celebrated Life and the Seasons
Marion McGarry
Paperback
€12.00

Ireland's Immortals: A History of the Gods of Irish Myth
Mark Williams
Paperback
€27.50