Did Ye Hear Mammy Died? is Seamas O'Reilly's memoir of growing up as one of eleven children in rural Northern Ireland in the 1990s after the death of their mother when Seamas was five.

He delves into his family - his pleasingly eccentric, reticent but deeply loving father; his rambunctious siblingd, intent on enforcing a byzantine age-based hierarchy; and the numerous bewildering friends, relations and neighbours who blew in and out to 'help'.

Seamas describes how his mother's death changed his childhood relationships with everyone and everything, as knowledge of his tragic experience preceded him. He writes hilariously and tenderly of how his father, Joe, strove to give his children a happy home and a good education - building bookshelves in every room so as to avoid having to lecture them on the importance of academic achievement; videotaping and obsessively cataloguing more than 800 films so as not to have to take out a Blockbuster subscription; having the local nuns cook their Christmas turkey every year.

This unusual childhood took place in Northern Ireland at the end of the Troubles, on the Irish border that Brexit has made once more into a hotly contested political frontier.

Seamas describes living on that boundary, including the time an IRA bomb blew out their windows when he was three. We then follow Seamas through his teenage years as a nascent political radical and amateur satirist, and his arrival in Dublin as a university student.

Did Ye Hear Mammy Died? is the story of a boy growing up; a family bonded by loss, love and mockery; and their triumphs and disasters as they reached for their goal of some kind of normality. 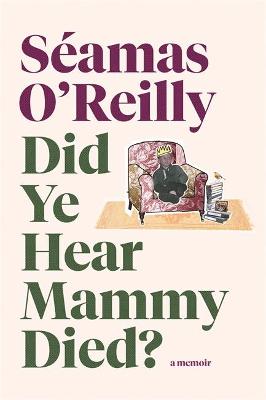 Talking to Strangers: And Other Ways of Being Human
Michael Harding
Paperback
€11.25

Sisters of the Resistance: The Nuns Who Defied the Nazis
Dennis J. Turner
Paperback
€11.25

The Happiest Man on Earth: The Beautiful Life of an Auschwitz Survivor
Eddie Jaku
Paperback
€11.25

When All is Said
Anne Griffin
Paperback

Something In The Water
Kieran McCarthy
Paperback

From the Oven to the Table
Diana Henry
Hardback
€30.10