Dinosaurs Are Not Extinct: Real Facts About Real Dinosaurs

Award-winning author-illustrator Drew Sheneman brings budding paleontologists the truth about dinosaurs in this informative and hilarious nonfiction picture book that will teach kids everything they didn't know (and never thought to ask) about their favorite subject-Dinosaurs! A long, long time ago, planet Earth was full of dinosaurs. Giant dinosaurs that ate plants, meat-eating dinosaurs that walked on two feet, dinosaurs with armored frills-all KINDS of dinosaurs. Until an asteroid appeared in the sky. A big one. A hot one. A moving-very-fast one. When it hit, most of the plants and animals on Earth went extinct. It was the end of the dinosaurs . . . . . . Or was it? Actually, the latest research shows that the dinosaurs didn't all go extinct. They're still around us now. In fact, you've probably seen dinosaurs at the park, eaten dinosaurs for dinner, and maybe even cleaned dinosaur poop off your family's car. Who are these dinosaurs living all around us? Find out in this informative, hilarious, and 100 percent factual nonfiction picture book by award-winning author, illustrator, and beloved syndicated cartoonist Drew Sheneman. 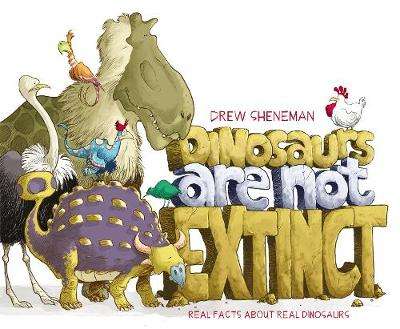 Hardback
Dinosaurs Are Not Extinct: Real Facts About Real Dinosaurs also appears in these Categories:

Through the Animal Kingdom
Derek Harvey
€12.05

The Complete Book of Riding and Pony Care
Gill Harvey
€12.05

Habitats and the Animals Who Live in Them: With Stickers and Activities to Make
Anita Genera
€14.45