For the first time, Richard S. Grayson tells the story of the Dubliners who served in the British military and in republican forces during the First World War and the Irish Revolution as a series of interconnected 'Great Wars'. He charts the full scope of Dubliners' military service, far beyond the well-known Dublin 'Pals', with as many as 35,000 serving and over 6,500 dead, from the Irish Sea to the Middle East and beyond. Linking two conflicts usually narrated as separate stories, he shows how Irish nationalist support for Britain going to war in 1914 can only be understood in the context of the political fight for Home Rule and why so many Dubliners were hostile to the Easter Rising. He examines Dublin loyalism and how the War of Independence and the Civil War would be shaped by the militarisation of Irish society and the earlier experiences of veterans of the British army. 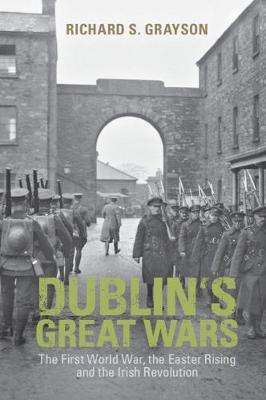 25.5% offPaperback
Dublin's Great Wars: The First World War, the Easter Rising and the Irish Revolu also appears in these Categories:

19% off
Saving the State: Fine Gael from Collins to Varadkar
Ciara Meehan
€22.49

10% off
Canada and Ireland: A Political and Diplomatic History
Philip J. Currie
€22.77

10% off
Civilising Rural Ireland: The Co-Operative Movement, Development and the Nation-
Patrick Doyle