'Exit Stage Left is the book I've long wanted to read about the PTSD-like after-effects of pop stardom - and Nick Duerden is the perfect writer for the job. The pop star's bittersweet lot - the mass adoration that comes with pop stardom, followed by the bathetic comedown of what inevitably follows - is represented with flair and empathy.' - Pete Paphides, author of Broken Greek 'Duerden finds fascinating layers of humanity, pathos, humour and wisdom in equal measure. A brilliant book, for artists and fans alike' - Frank Turner 'Fame is the brightest candle, but in this brilliant collection of interviews, Nick Duerden answers the question: what does a candle do after it's burned out?' - David Quantick The desire for adulation is a light that never goes out. We live in a culture obsessed by the notion of fame - the heedless pursuit of it; the almost obligatory subsequent fallout. But what's it like to actually achieve it, and what happens when fame abruptly passes, and shifts, as it does, onto someone else? This is the world the pop star is required to inhabit. It's invariably eventful. We know all about them when they're at the top of their game, of course, but they tend to reveal far more of their true selves once they've peaked, and are on their way down. This is the point at which they are at their most heroic, because they don't give up. They keep on striving, keep making music, and refuse simply to ebb away. Some sustain themselves on the nostalgia circuit, others continue to beaver away in the studio, no longer Abbey Road, perhaps, so much as the garden shed. But all of them, in their own individual ways, still dare to dream. Exit Stage Left features tales of drug addiction, bankruptcy, depression and divorce, but also of optimism, a genuine love of the craft, humility and hope. This is a candid, laugh-out-loud and occasionally shocking look at what happens when the brightest stars fall back down to earth. Featuring brand new interviews with the likes of: Bob Geldof, Shaun Ryder, Robbie Williams, Roisin Murphy, Stewart Copeland, Billy Bragg, Wendy James, Alex Kapranos, Joan Armatrading, Leo Sayer, Gary Lightbody, Lisa Maffia, Tim Booth, Bill Drummond, Rufus Wainwright, David Gray, and Justin Hawkins. 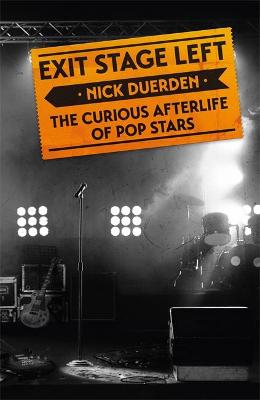