Exotic Vetting: What Treating Wild Animals Teaches You About Their Lives

How to catch a kangaroo? Anaethetise a shark? Operate on a tarantula?

It's all in a day's work for the world's wildest veterinarian.

Travelling from the rainforests of Sierra Leone to the jungles of Borneo, wildlife vet Romain Pizzi has caught, anaesthetised, diagnosed, operated on, medicated, and then released some of the world's most endangered wild animals.

From disease testing Polynesian snails to keyhole surgery in Sumatran orangutans; from endoscopy in sharks to ultrasound on a chimpanzee. Sometimes this is high tech work, such as the first robotic surgery in a tiger, or giant panda cloning attempts. Sometimes the situations are more primitive, from anaesthetising a bear with a bicycle pump, old plumbing tubes and a plank, to operating on a vulture using an old metal spoon.

In Exotic Vetting Pizzi shares his extraordinary stories as well as his insight into the amazing breadth of biology and bewildering range of veterinary procedures needed to help animals get better. He also shares tips on where to run when the patient unexpectedly wakes up. 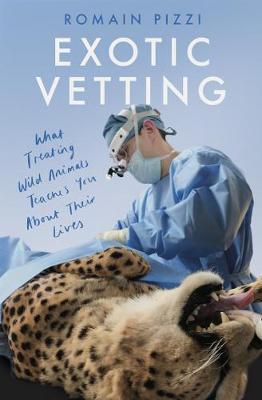 Trade Paperback
Exotic Vetting: What Treating Wild Animals Teaches You About Their Lives also appears in these Categories:

A Life on Our Planet: My Witness Statement and a Vision for the Future
David Attenborough
Paperback
€12.50

A Trillion Trees: How We Can Reforest Our World
Fred Pearce
Paperback
€12.50