**Formerly published as The Lost Boys** 'Remarkable. A powerful, engrossing story of a journey into the heart of darkness and final escape from it' Sunday Times In September, 1944, the SS march into a remote Italian castle, arrest a mother and seize her two sons, aged just two and three. If Hitler has his way she will never see them again. For Fey Pirzio-Biroli is the daughter of Ulrich von Hassell, executed days before after the failed assassination of the Fuhrer. Mercilessly cast into the Nazi death machine, Fey must cling to the hope that one day she will escape and rescue her lost children . . . 'Riveting, important, reads like a terrifying thriller' Daily Telegraph 'Heartbreaking. It started with a plot to kill Hitler. It ended in one of the most astonishing and moving stories of the war' Daily Mail 'Extraordinary. A rich, deep, gripping read' Guardian 'As thrilling as any novel. Bailey has an extraordinary talent for bringing history to life' Kate Atkinson 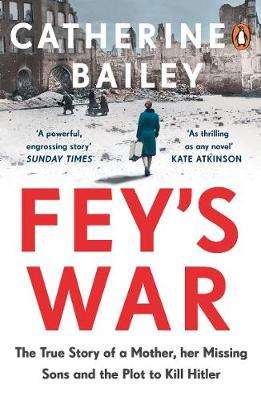 Paperback
Fey's War: the Plot to Kill Hitler also appears in these Categories:

Gentle on My Mind: In Sickness and in Health with Glen Campbell
Kim Campbell
€24.10

Life as a Unicorn: A Journey from Shame to Pride and Everything in Between
Amrou Al-Kadhi
€12.05

Chasing The Light: How I Fought My Way into Hollywood - From the 1960s to Platoo
Oliver Stone
€21.25