Gestapo: The Story Behind Hitler's Machine of Terror

The names Klaus Barbie, Adolf Eichmann, Hermann Goering, Reinhard Heydrich, Heinrich Himmler and Ernst Kaltenbrunner struck terror into law-abiding citizens let alone those who resisted Adolf Hitler. These men were leaders of the Gestapo, the secret police during the times of the Nazis. This book outlines who the Gestapo were, how they operated, what their numbers were, the terrible crimes they committed and how they paid for these in the end when they were hunted down after the war.

This history details how the Gestapo came to power in the wake of the Reichstag fire, how they purged the Brown Shirts during the Night of the Long Knives, how they held Berlin in grip of terror during the 1936 Olympic Games and how they went to play an evil role in the rounding up of victims to be sent to the concentration camps. Focuses on prominent Nazis, including Adolf Hitler, and explains the crucial role the Gestapo played in the power structure of the Third Reich. 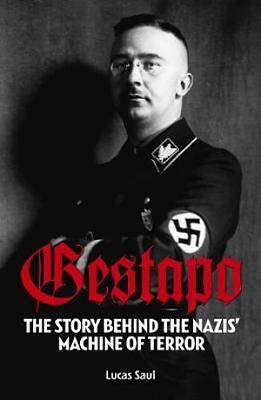 Paperback
Gestapo: The Story Behind Hitler's Machine of Terror also appears in these Categories: