Travel through the ages, year by year, in this visual history for children told on a timeline that stretches from prehistoric times to the modern day. In this updated volume, the timeline reaches 2018, documenting recent events, including the Syrian War and the continuing exploration of space by the Juno and New Horizons probes. This unique book joins the dots of history by putting historic events across the world on one timeline, including prehistoric people, key civilizations (Ancient Egyptians, Ancient Greeks, Romans, Aztecs, and Incas), world exploration, the Industrial Revolution, the American Civil War, the world wars, and humans on the Moon. Every page is packed with pictures and original artefacts, to give a snapshot of an era. There are also features that explain major events, such as the rise of the Roman Empire, or the fall of Communism. "Child of the Time" explores the lives of children in history, from the tough training of a Spartan warrior to the lives of young pioneers on a wagon train heading west across America in the 20th century. A "Moment in Time" freeze-frames a particularly historic event, such as the first flight of the Wright Brothers. DK's History Year by Year shows the influences, patterns, and connections between the events that have shaped our world and reveal the history of the world as never before. 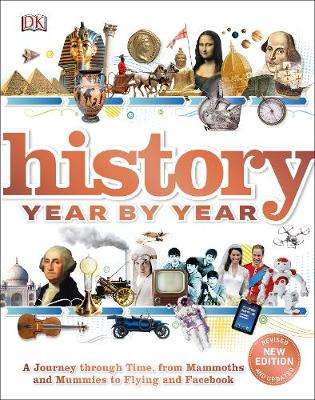 21% offHardback
History Year by Year also appears in these Categories:

20% off
The Life of Anne Frank: With a folder of documents to personalise
Kay Woodward
€15.00

20% off
Myths, Legends, and Sacred Stories A Children's Encyclopedia
DK
€19.99

20% off
Rocking the System: Fearless and Amazing Irish Women who Made History
Siobhan Parkinson
€9.00