Infinite Powers: The Story of Calculus

Shortlisted for the Royal Society Science Book Prize 2019 A magisterial history of calculus (and the people behind it) from one of the world's foremost mathematicians. This is the captivating story of mathematics' greatest ever idea: calculus. Without it, there would be no computers, no microwave ovens, no GPS, and no space travel. But before it gave modern man almost infinite powers, calculus was behind centuries of controversy, competition, and even death. Taking us on a thrilling journey through three millennia, professor Steven Strogatz charts the development of this seminal achievement from the days of Archimedes to today's breakthroughs in chaos theory and artificial intelligence. Filled with idiosyncratic characters from Pythagoras to Fourier, Infinite Powers is a compelling human drama that reveals the legacy of calculus on nearly every aspect of modern civilisation, including science, politics, medicine, philosophy, and much besides. 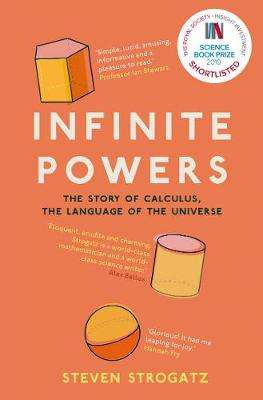 Paperback
Infinite Powers: The Story of Calculus also appears in these Categories:

Can Medicine Be Cured?: The Corruption of a Profession
Seamus O'Mahony
€12.50

How the Brain Works: The Facts Visually Explained
DK
€21.25

Wayfinding: The Art and Science of How We Find and Lose Our Way
Michael Bond
€18.75

The Dance of Life: Symmetry, Cells and How We Become Human
Magdalena Zernicka-Goetz
€23.75

The World According to Physics
Jim Al-Khalili
€16.25

The Gendered Brain: The new neuroscience that shatters the myth of the female br
Gina Rippon
€12.35

How to Argue With a Racist: History, Science, Race and Reality
Adam Rutherford
€16.05