The seminal history of Ireland's most unusual century, thoroughly updated for the new millennium. With its starting point the bloody creation of the Irish Free State in 1922, Ireland: A Social and Cultural History explores how Irish identity has shifted across eighty years of unprecedented change and violence. What was the legacy of De Valera and Sinn Fein - or of remaining neutral during the Second World War? What were the effects of the establishment of a formally recognised Republic of Ireland in 1949 and thus the continued status of Northern Ireland as part of Great Britain? How has the state of virtual civil war that has existed between Catholics and Protestants in Northern Ireland ever since altered the course of Irish history? Terence Brown evokes all the turbulent (and often confusing) events of the last century and makes sense of them, showing with skill and wit just how Irish culture escaped from W B Yeats' backward-looking Celtic Twilight towards modernity. Ireland: A Social and Cultural History is a fascinating work of synthesis - and an unforgettable book. 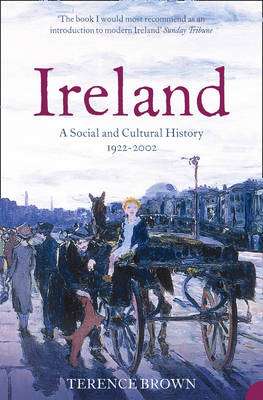 NUIG onlyP
Ireland: A Social and Cultural History 1922-2001 also appears in these Categories:

The History of Early English: An activity-based approach
Johnson, Keith (University of Lancaster,

Germany and Austria Since 1814
Mark Allinson

An Irish Navvy: The Diary of an Exile
Donall MacAmhlaigh

Major Problems in the Civil War and Reconstruction: Documents and Essays
Michael Perman

The Third Reich at War: How the Nazis Led Germany from Conquest to Disaster
Richard J. Evans