We talked to leading rugby journalists, we talked to ex-players, we talked to fans and we looked at the playing records of all the stand-out internationals to have played rugby for Ireland before compiling a list of the 50 greatest Irish rugby players in the sports history.

Many players were impossible to leave out such as Rory Best, Mike Gibson, Jamie Heaslip, Jack Kyle, Paul O'Connell, Brian O Driscoll, Ronan O'Gara, Jonnie Sexton and Keith Wood. While Lions' legends such as Willie John McBride, Tom Kiernan, Syd Millar and Tony O'Reilly were also a shoo-in.There is also a hefty selection of modern-day players including Keith Earls, Tadhg Furlong, Cian Healy, Rob Kearney, Conor Murray, Peter O'Mahoney and the new whizkid winger Jacob Stockdale. While there is also space for the great characters of the game, none more so than Peter 'The Claw' Clohessy, Willie Duggan and Moss Keane, who didn't win the most caps but were fans' favourites because of the spirit in which they played.

With a foreword by Ollie Campbell, the Ireland and British and Irish Lions flyhalf, each entry lists the key facts, statistics and achievements that help show why the selected players are part of the games elite. 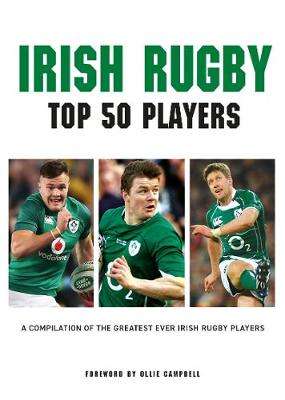