Killing at its Very Extreme

Killing at its Very Extreme takes the reader to the heart of Dublin from October 1917 to November 1920, effectively the first phase of Dublin's War of Independence. It details pivotal aspects at the outset, then the ramping up of the intelligence war, the upsurge in raids and assassinations.

Vividly depicting mass hunger-strikes, general strikes, prison escapes, and ruthless executions by the full-time IRA 'Squad', amid curfews and the functioning of an audacious alternative government. Intensity builds as the reader is embedded into Commandant Dick McKee's Dublin Brigade to witness relentless actions and ambushes.

The authors' unprecedented access lays bare many myths about key players from both sides. The tempo escalates with deployment of the notorious Black and Tans and Auxiliaries, as well as a host of cunning political and propaganda ploys. Desperate plights and horrific reprisals are portrayed, the effects of mass sectarian pogroms and killings. The sacking of Balbriggan, the killing of Sean Treacy, the death of Terence MacSwiney, and the capture and execution of teenager Kevin Barry.

As in the authors' previous works the pulsating tension, elation, fear, desperation, hunger, the mercy and the enmity leap from the pages. The harrowing circumstances suffered by those whose sacrifices laid the bedrock for modern Ireland, and whose own words form the book's primary sources, are recounted in unflinching detail. 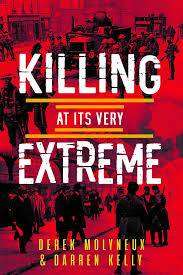 Paperback
Killing at its Very Extreme also appears in these Categories: