Despite the all-pervading influence of television ninety per cent of people in Britain still listen to the radio, clocking up over a billion hours of listening between us every week. It's a background to all our lives: we wake up to our clock radios, we have the radio on in the kitchen as we make the tea, it's on at our workplaces and in our cars. From Listen With Mother to the illicit thrill of tuning into pirate stations like Radio Caroline; from receiving a musical education from John Peel or having our imagination unlocked by Douglas Adams' The Hitchhiker's Guide to the Galaxy; from school-free summers played out against a soundtrack of Radio One and Test Match Special to more grown-up soundtracks of the Today programme on Radio 4 and the solemn, rhythmic intonation of the shipping forecast - in many ways, our lives can be measured in kilohertz. Yet radio is changing because the way we listen to the radio is changing. Last year the number of digital listeners at home exceeded the number of analogue listeners for the first time, meaning the pop and crackle and the age of stumbling upon something by chance is coming to an end. There will soon be no dial to turn, no in-between spaces on the waveband for washes of static, mysterious beeps and faint, distant voices. The mystery will be gone: we'll always know exactly what it is we're listening to, whether it's via scrolling LCD on our digital radios, the box at the bottom of our TV screen or because we've gone in search of a particular streaming station. And so, as the world of analogue listening fades, Charlie Connelly takes stock of the history of radio and its place in our lives as one of the very few genuinely shared national experiences. He explores its geniuses, crackpots and charlatans who got us to where we are today, and remembers its voices, personalities and programmes that helped to form who we are as individuals and as a nation. He visits the key radio locations from history, and looks at its vital role over the past century on both national and local levels. Part nostalgic eulogy, part social history, part travelogue, Last Train To Hilversum is Connelly's love letter to radio, exploring our relationship with the medium from its earliest days to the present in an attempt to recreate and revisit the world he entered on his childhood evenings on the dial as he set out on the radio journey of a lifetime. 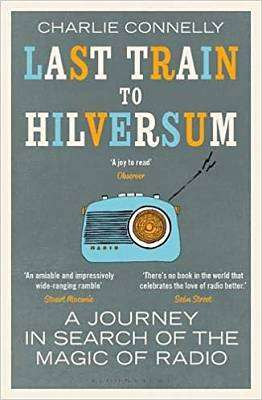 Paperback
Last Train to Hilversum also appears in these Categories: