L.E.L.: The Lost Life and Mysterious Death of the 'Female Byron'

A famous poet, a mysterious death and a story stranger than fiction. - this is the lost life and mytserious death of the 'Female Byron' On 15 October 1838, the body of a thirty-six-year-old woman was found in Cape Coast Castle, West Africa, a bottle of Prussic acid in her hand. She was one of the most famous English poets of her day: Letitia Elizabeth Landon, known by her initials 'L.E.L.' What was she doing in Africa? Was her death an accident, as the inquest claimed? Or had she committed suicide, or even been murdered? To her contemporaries, she was an icon, hailed as the 'female Byron', admired by Elizabeth Barrett Browning, Heinrich Heine, the young Bronte sisters and Edgar Allan Poe. However, she was also a woman with secrets, the mother of three illegitimate children whose existence was subsequently wiped from the record. After her death, she became the subject of a cover-up which is only now unravelling. Too scandalous for her reputation to survive, Letitia Landon was a brilliant woman who made a Faustian pact in a ruthless world. She embodied the post-Byronic era, the 'strange pause' between the Romantics and the Victorians. This new investigation into the mystery of her life, work and death excavates a whole lost literary culture. FROM THE AUTHOR OF THE BRONTE MYTH 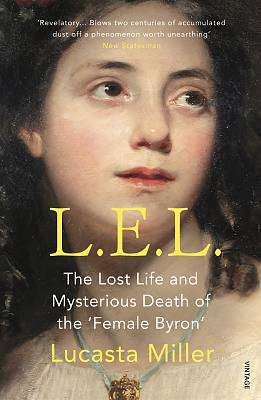 Paperback
L.E.L.: The Lost Life and Mysterious Death of the 'Female Byron' also appears in these Categories: