Letters to the Earth: Writing to a Planet in Crisis

The largest creative response to the climate and ecological emergency the world has yet seen. 2019 was the year of rebellion. It was the year nurses, poets, nine-year olds and grandparents came together to say: we know the truth about climate change - now it is time to act. But what words describe this crisis? What words can help our children come to terms with the future they will inherit? Earlier this year, Culture Declares Emergency invited people from all around the world to find those words by writing a letter to the earth. The invitation was open to all - to think beyond the human narrative and bear witness to the scale of the crisis. Letters of love, loss, hope and action were written by over 1000 people. Now published as a collection, Letters To The Earth brings together the voices of children and the public with authors, scientists and playwrights in the first creative project of its kind. Alongside letters from the public, Letters To The Earth received submissions from artist and peace activist Yoko Ono, poet Kate Tempest, actor Mark Rylance, author, and illustrator of The Lost Words Jackie Morris, novelist Anna Hope, environmental writer Jay Griffiths and Green Party MP Caroline Lucas . Together they are an invitation to consider how this existential threat affects the way we live our lives and the action we take. Lots of books consider the climate and ecological crisis from a political or scientific perspective, but Letters To The Earth is the first book to chronicle how humankind is collectively processing planetary crisis. 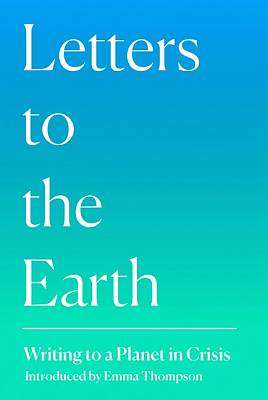 12% offHardback
Letters to the Earth: Writing to a Planet in Crisis also appears in these Categories:

Elephants: Birth, Life and Death in the Land of the Giants
Hannah Mumby
€18.75

Disaster by Choice: How our actions turn natural hazards into catastrophes
Ilan (Professor of Disasters and Kelman
€21.25

Lucy's Law: The story of a little dog who changed the world
Marc Abraham
€11.25

Homing: On Pigeons, Dwellings and Why We Return
Jon Day
€12.50

Our House is on Fire: Scenes of a Family and a Planet in Crisis
Malena Ernman
€21.25

The Complete Dog Breed Book: Choose the Perfect Dog For You
DK
€21.25

The Way Home: Tales from a life without technology
Mark Boyle
€12.50

The Future We Choose: Surviving the Climate Crisis
Christiana Figueres
€16.25

My Family and the Galapagos
Monty Halls
€18.50