'Who has not heard of the Liberator?' Following the winning of Catholic Emancipation in 1829, Daniel O'Connell was recognised as one of the leading figures on the world stage. He was hailed as 'the defender of Ireland', the man who had 'incarnated in himself a people'. Identified as the champion of the weak and the oppressed, he became famous internationally for his opposition to slavery in all its forms. However his attempts to overturn the Act of Union and restore the Irish parliament were less successful and he became depressed and demoralised as his popularity began to fade in the late 1830s. In this sequel to his critically acclaimed King Dan, Patrick Geoghegan looks at the dramatic final years of O'Connell's life and career. Charting his remarkable rise and fall in the 1830s, it also deals with his political resurrection in the 1840s when he rolled back the years to lead a new national movement, culminating in a series of massive public meetings around the country. In doing so he developed a new model for peaceful agitation, and confirmed his reputation as the man who Gladstone believed was the Moses of Ireland. 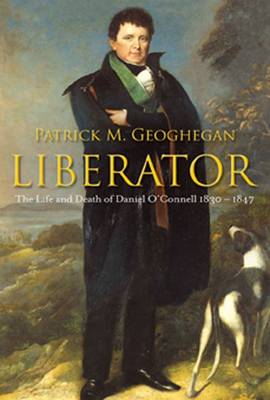 10% offPaperback
Liberator: The Life and Death of Daniel O'Connell 1830-1847 also appears in these Categories: