In 1939, young Italian Jew Guido Orefice (Roberto Benigni) travels with his friend Ferruccio to Arezzo, where his uncle has promised to help set him up with a bookshop.

Guido and Dora marry, have a son, Giosué, and are very happy.

However, when war breaks out a few years later, Guido and Giosué are moved to a Nazi concentration camp.

Determined to protect his son from the horrors of war, Guido tells him that the camp is all part of a game, and that Giosué's prize will be a life-size version of the toy tank he loves to play with. 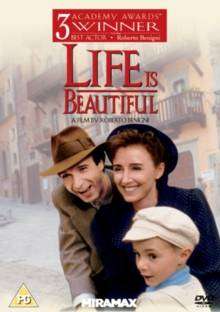 DVD
Life is Beautiful also appears in these Categories: