Oscar-winning documentary by James Marsh telling the story of what has since been described as 'the artistic crime of the century'.

On August 7th 1974, a young Frenchman called Philippe Petit stepped out on a wire suspended between the twin towers of New York's World Trade Center, at the time the world's tallest buildings.

Petit and his team had spent several months planning the performance in detail: bypassing security, smuggling wire and rigging equipment into the towers, suspending the wire between the two towers at the perfect tension to withstand both the wind and the swaying of the buildings - all without being caught. 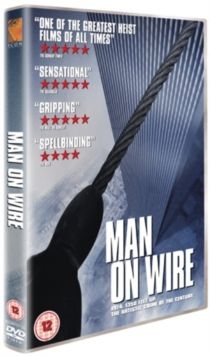 DVD
Man on Wire DVD also appears in these Categories: