Imagine a world in which a vast network of misogynists is able to operate, virtually undetected. Imagine a world in which these extremists commit terrorist acts, united by their deep hatred of women. Imagine a world in which they groom and radicalise vulnerable teenage boys, shielded by veils of irony and 'banter'. Imagine a world in which their community swells to become an international movement, tens of thousands strong. You don't have to imagine that world ... you already live in it. In her explosive new book, acclaimed feminist writer Laura Bates lifts the lid on the communities of men who hate women, going undercover, both on- and offline, to explore the ideology and impact they have worldwide. Starting in the murkiest depths of the internet, Laura observes these groups in action, from incels and pickup artists to Men's Rights Activists and Men Going Their Own Way, tracing how effectively their ideas have been smuggled into our collective consciousness - via trolls, the media, celebrities and politicians - to emerge unchecked in our schools, workplaces and corridors of power, posing deadly harm to men and women alike. Including exclusive interviews with former members of these groups, as well as with the men fighting against them, Laura seeks to understand what attracts people to this movement, how it operates - and, above all, what must be done to stop it. 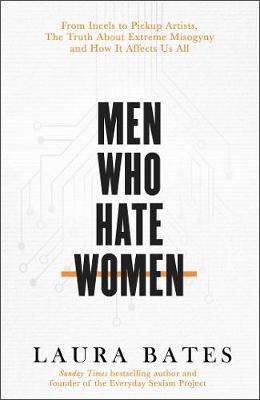 Hardback
Men Who Hate Women also appears in these Categories:

Outrages: Sex, Censorship and the Criminalisation of Love
Naomi Wolf
€20.45

The Simple Guide to Complex Trauma and Dissociation: What it is and How to Help
Betsy de Thierry
€12.05

Made in Ireland: Studies in Popular Music
Mangaoang, Aine (University of Oslo, Nor
€42.15

Spectrums: Autistic Transgender People in Their Own Words
Maxfield Sparrow
€18.05