When Rory Cowan stepped down from the role of Rory in Mrs Brown's Boys after 26 years, it made national headlines. Here, in his unique voice, the much-loved entertainer tells his story, with a star turn from his greatest cheerleader, his mum, Esther, and how the confidence she gave him in his early years set him on the path from mischievous teenager to national treasure. Laugh-out-loud funny and searingly honest, Rory's tales of growing up in 1970s Dublin will make your hair curl, but there is also sadness as he describes Esther's dementia and the particular pain of gradually losing a loved one to such a cruel disease. This is the magical and moving account of a mother-and-son bond, and an unexpected progression from record-shop manager to comedy icon, told with all the humour and warmth you'd expect from one of Ireland's much-loved stars. 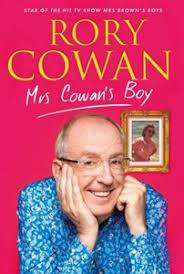