My Crazy World: The Autobiography

THE IRISH TIMES NUMBER ONE BESTSELLER 'He holds nothing back and gives everything' Bono Christy Dignam, lead singer of Aslan and one of Ireland's greatest rock stars, reveals all in this extraordinary tale of excess and devotion to his music. Growing up in Finglas, Dublin, there was only one thing Christy Dignam ever wanted to do - and that was sing. By the early 1980s, he had formed the band Aslan, part of a new wave of acts coming out of Ireland. Repeatedly chewed up and spat out in the feeding frenzy to sign 'the next U2', they stuck to their principles. developed a loyal following, and their first album Feel No Shame went to No 1 in their home country, showcased by the song 'This Is', which Christy proudly acknowledges has become 'part of Ireland's DNA'. But just as America seemed ready to fall for Aslan, Dignam was battling with heroin addiction, perhaps caused by having been sexually abused as a child, and so he was kicked out of the band. In 1993, after five years in the wilderness, he rejoined Aslan, leading the outfit to a triumphant second coming, despite struggling with further drug problems and serious illness. In this compelling memoir, Dignam looks back over his long career, vividly bringing to life the good times and the bad, but always remembering that at the heart of it all are his songs and his family. 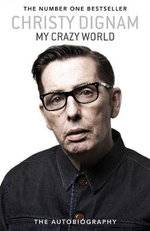 Paperback
My Crazy World: The Autobiography also appears in these Categories:

Prince: All the Songs: The Story Behind Every Track
Benoit Clerc
Hardback
€62.50