The people of Northern Ireland now face a choice. On one hand, increasing polarization could lead to complete communal seperation between Unionists and Nationalists, and at worst a "Bosnian solution". On the other, communal sharing based on power-sharing, fair employment and better communications could be achieved. This forward-looking study concentrates on current efforts to resolve the conflict. The continuing divisions and conflict are discussed, but the authors comment on many less-reported aspects, such as growing pan-Ireland business links, the people in the "middle ground" who want to live together peacefully, and the stereotyped views of the British. In the chapter, "The peacemakers", they survey 1992-3 - a hope, where the Warrington bombings provoked unprecedented public reaction in Britain and Ireland. The peacemaking initiatives that have sprung up over the years have faded without achieving their goal. With a new leadership in the Republic, the authors believe that by building on the better communications between Britain and Ireland, new structures can be found that will accommodate the interests of both communities. At the cutting edge of political theory, "The future" sets out how these structures could be achieved in a British/Irish and European context. It is for the governments and the people to decide what happens now. 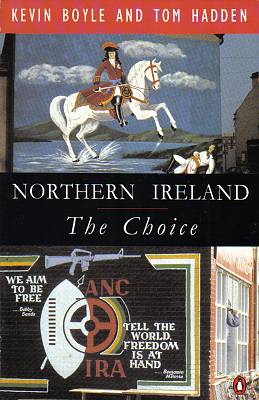 80% offPaperback
NORTHERN IRELAND: THE CHOICE also appears in these Categories:

68% off
The New Yorker Encyclopedia of Cartoons
Robert Mankoff
Hardback
€29.99

78% off
Roger Casement in Death: Or Haunting the Free State
W.J. McCormack
Paperback
€5.99

82% off
The Undoing of Arlo Knott
Heather Child
Paperback
€2.00