Once A Bitcoin Miner

Ethan Lou goes on an epic quest through the proverbial cryptocurrency Wild West, through riches, absurdity, wonder, and woe. From investing in Bitcoin in university to his time writing for Reuters, and then mining the digital asset ? Lou meets a co-founder of Ethereum and Gerald Cotten of QuadrigaCX (before he was reported dead), and hangs out in North Korea with Virgil Griffith, the man later arrested for allegedly teaching blockchain to the totalitarian state.

Coming of age in the 2008 financial crisis, Lou's generation has a natural affinity with this rebel internet money, this so-called millennial gold, created in the wake of that economic storm. At once an immersive narrative of adventure and fortune, Once a Bitcoin Miner is also a work of journalistic rigor. Lou examines this domain through the lens of the human condition, delving deep into the lives of the fast-talkers, the exiles, the ambitious, and the daring, forging their paths in a new world harsh and unpredictable. 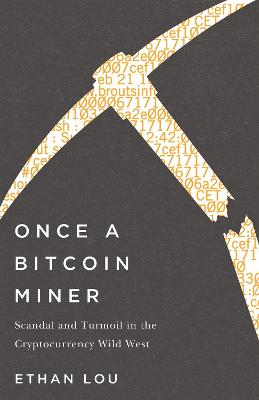 Paperback
Once A Bitcoin Miner also appears in these Categories:

Rich Dad Poor Dad: What the Rich Teach Their Kids about Money That the Poor and
Robert T Kiyosaki
Paperback
€21.60

Elon Musk: How The Billionaire Ceo Of Spacex And Tesla Is Shaping Our Future
Ashlee Vance
Paperback
€13.75