Paper Bullets: Two Artists Who Risked Their Lives to Defy the Nazis

Hunted by the secret field police, Lucy and Suzanne were finally betrayed in 1944, when the Germans imprisoned them, and tried them in a court martial, sentencing them to death for their actions. Ultimately they survived, but even in jail, they continued to fight the Nazis by reaching out to other prisoners and spreading a message of hope. Better remembered today by their artist names, Claude Cahun and Marcel Moore, the couple's actions were even more courageous because of who they were: lesbian partners known for cross-dressing and creating the kind of gender-bending work that the Nazis would come to call "degenerate art." In addition, Lucy was half Jewish, and they had communist affiliations in Paris, where they attended political rallies with Surrealists and socialized with artists like Gertrude Stein. Paper Bullets is a compelling World War II story that has not been told before, about the galvanizing power of art, and of resistance. 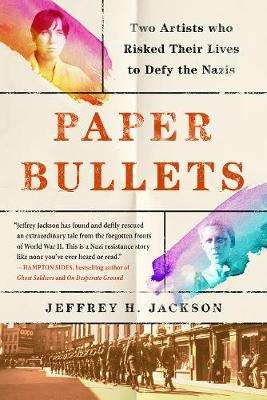 Hardback
Paper Bullets: Two Artists Who Risked Their Lives to Defy the Nazis also appears in these Categories:

America Before: The Key to Earth's Lost Civilization
Graham Hancock
€12.99