'You have a choice which way you go in this war...' Paris, September 1940. After three months under Nazi Occupation, not much can shock Detective Eddie Giral. That is, until he finds a murder victim who was supposed to be in prison. Eddie knows, because he put him there. The dead man is not the first or the last criminal being let loose onto the streets. But who is pulling the strings, and why? This question will take Eddie from jazz clubs to opera halls, from old flames to new friends, from the lights of Paris to the darkest countryside - pursued by a most troubling truth: sometimes to do the right thing, you have to join the wrong side... Based on eye-opening historical research, Paris Requiem is at once a riveting crime novel and a haunting portrait of life under Occupation, from the winner of the Historical Writers' Association Gold Crown Award for best historical fiction. * * * * * Praise for Chris Lloyd's Occupation series, featuring Detective Eddie Giral: 'Terrific ... Powerful stuff' SUNDAY TIMES, Books of the Month 'A thoughtful, haunting thriller' MICK HERRON 'Such a powerful and morally nuanced crime novel. Both a gripping murder mystery and a vivid recreation of Paris under German Occupation' ANDREW TAYLOR 'A brilliant, breathtaking tour-de-force. It's up there with luminaries such as Philip Kerr, Sebastian Faulks and Manda Scott - in fact, it's probably better than all of those.' DAVID YOUNG 'Sharp and compelling' THE SUN

Printed on or after 23/02/23. Please note dispatch may take 5-10 days after publication date.
A separate order should be placed for this item. If you order this along with other items, your entire order will be held and despatched when complete. 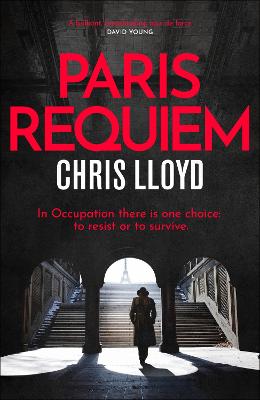 For Thy Great Pain Have Mercy On My Little Pain
Victoria MacKenzie
Hardback
€18.75

The Cloisters: The Secret History for a new generation
Hays, Katy, MA and PhD in Art History
Hardback
€18.75

My Father's House: From the Sunday Times bestselling author of Star of the Sea
Joseph O'Connor
Hardback
€24.99

The Mysterious Case of the Alperton Angels
Janice Hallett
Hardback
€21.25

The Darlings of the Asylum
Noel O'Reilly
Hardback
€21.25