Political Purgatory: The Battle to Save Stormont and the Play for a New Ireland

This is a book about political stasis; the purgatory that Stormont became, and the sins of that long standoff. The story begins in January 2017, with Martin McGuinnesss dramatic resignation as Deputy First Minister, and chronicles all the behind-the-scenes negotiations that ultimately resulted in the restoration of the Executive in January 2020, with the New Decade New Approach agreement. Then, that new fight with a fearsome and unknowable foe: Coronavirus.

Political Purgatory charts the three years from the collapse and restoration of the northern Executive to Covid-19 in the wider frame of building peace after conflict, and we turn the next corner into the centenary of Northern Ireland and that louder call for Irish unity, since Brexit, like a piece of heavy machinery on fragile ground, has left cracks across the Union.


Spanning several decades, some of the biggest names on the inside of Irish and British politics and policing, including Gerry Adams, Peter Robinson, Julian Smith and Simon Coveney, help veteran journalist Brian Rowan turn the pages in what President Clinton has called the long war for peace. 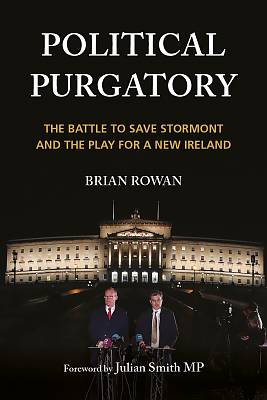 9% offPaperback
Political Purgatory: The Battle to Save Stormont and the Play for a New Ireland also appears in these Categories:

18% off
Ballymacandy: The Story of a Kerry Ambush
Owen O'Shea
Paperback
€14.95

The Dead of the Irish Revolution
Eunan O'Halpin
Hardback
€60.99

Say Nothing: A True Story Of Murder and Memory In Northern Ireland
Patrick Radden Keefe
Paperback
€12.20