Named One of 7 Best Nonfiction Books of the Fall by Kirkus Reviews Andy Borowitz, "one of the funniest people in America" (CBS Sunday Morning), brilliantly examines the intellectual deterioration of American politics, from Ronald Reagan to Dan Quayle, from George W. Bush to Sarah Palin, to its apotheosis in Donald J. Trump. The winner of the first-ever National Press Club award for humor, Andy Borowitz has been called a "Swiftian satirist" (The Wall Street Journal) and "one of the country's finest satirists" (The New York Times). Millions of fans and New Yorker readers enjoy his satirical news column "The Borowitz Report." Now, in Profiles in Ignorance, he offers a witty, spot-on diagnosis of our country's political troubles by showing how ignorant leaders are degrading, embarrassing, and endangering our nation. Borowitz argues that over the past fifty years, American politicians have grown increasingly allergic to knowledge, and mass media have encouraged the election of ignoramuses by elevating candidates who are better at performing than thinking. Starting with Ronald Reagan's first campaign for governor of California in 1966 and culminating with the election of Donald J. Trump to the White House, Borowitz shows how, during the age of twenty-four-hour news and social media, the US has elected politicians to positions of great power whose lack of the most basic information is terrifying. In addition to Reagan, Quayle, Bush, Palin, and Trump, Borowitz covers a host of congresspersons, senators, and governors who have helped lower the bar over the past five decades. Profiles in Ignorance aims to make us both laugh and cry: laugh at the idiotic antics of these public figures, and cry at the cataclysms these icons of ignorance have caused. But most importantly, the book delivers a call to action and a cause for optimism: History doesn't move in a straight line, and we can change course if we act now. 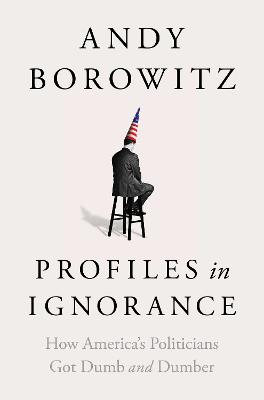 Hardback
Profiles in Ignorance also appears in these Categories:

Can Ireland Be One?
Malachi O'Doherty
Trade Paperback
€16.95

Factfulness - Ten Reasons Why We Are Wrong About The World
Hans Rosling
Paperback
€13.75

7% off
How to Stand Up to a Dictator
Maria Ressa
Trade Paperback
€17.50

How to Win the War on Truth
Samuel C. Spitale
Paperback
€28.75

The Storm is Here: America on the Brink
Luke Mogelson
Trade Paperback
€18.75