The Farm by Lough Gur

'The Farm by Lough Gur was first published in London in 1937 and quickly reprinted. It was well received in England and a best-seller in Dublin. Some questioned its quiet recall of an elysian rural Ireland before the Land War, its image of a contented Victorian world in the rich lands of east Limerick that rather jarred with the rhetoric of De Valera's Ireland. Its woodcut images seemed English not Irish, and its ambiguous authorship gave ammunition to the doubters - was this really the voice of old Mary Fogarty, nee O'Brien, or the heavily edited text produced by an Anglo-Irish friend and litterateur, Mary Lady Carbery?

The text was indeed crafted by Mary Carbery, a sharp observer and accomplished essayist who published a fine memoir of her own childhood in 1942 (Happy world). But the pungent strength of the book rests on Mary Fogarty's contribution: the draft notes and papers that she sent over to Mary Carbery, fleshed out by information supplied by other members of the O'Brien clan. Her memories provide what remains an entirely convincing account of the lost world of the strong-farm family in post-famine Munster, one far more secure in its social status than that of other Catholic writers such as Charles Kickham or Canon Sheehan. It depicts a social hierarchy of dominant men and credulous servants and hangers-on, mirroring the hierarchy of formal religiosity that overlaid the rich landscape of folk belief and custom.

The predominant register may indeed be Mary Carbery's, but the social description is authentic and convincing. As Thomas McGreevy, a perceptive early reviewer, noted: the book is like a symphony in terms of portraiture, for the characters are vividly depicted, not only as individuals, but as influencing each others' lives...Mrs. Fogarty, standing apart from them all and observing them all with her unerring instinct for the humanly significant, has, under Lady Carbery's well-nigh perfect editing, put them and herself on the literary map of Ireland as clearly as Pushkin put the characters in his stories on the literary map of old Russia.'

Over seventy years later, there are still precious few histories and even fewer fictional accounts of that rural Catholic middle class like the O'Briens, who confidently expected to be the inheritors of the earth in a Home-Rule Ireland. Their world has rarely been evoked so sensitively as in this beguiling and most engaging narrative.' -Daid Dickson, Department of History, Trinity College Dublin. 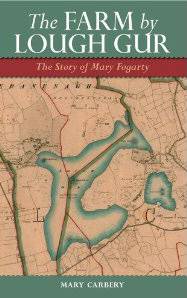 Paperback
The Farm by Lough Gur also appears in these Categories:

A Year of the Banner
Kevin Haugh
Paperback
€20.00