A new episode in Feist's massively successful Riftwar saga. From the endlessly inventive mind of one of fantasy's all-time greats, comes a spellbinding new adventure featuring old favourites Jimmy, Locklear and Pug. It is nine years on from the aftermath of Sethanon.There has been peace awhile and it's been needed. But news is feeding through to the people of the Kingdom of the Isles that deadly forces are stirring on the horizon. The bringer of the latest tidings is Gorath, a moredhel (dark elf).The bloodletting has started. Nighthawks are murdering again. Politics is a dangerous, cut-throat game once more.At the root of all this unrest lie the mysterious machinations of a group of magicians known as The Six. Meanwhile, renegade Tsurani gem smugglers, a rival criminal gang to the Mockers led by someone known only as The Crawler, and traitors to the crown are all conspiring to bring the Kingdom of the Isles to its knees. 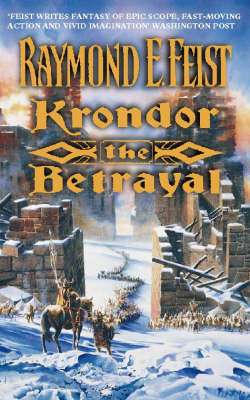 The Faceless Old Woman Who Secretly Lives in Your Home
Joseph Fink
€10.85

The Kingdom of Liars
Nick Martell
€12.05

Castles Made Of Sand
Gwyneth Jones
€12.05

The Light of All That Falls: Book 3 of the Licanius trilogy
James Islington
€12.05