Sam Wu is Not Afraid of Space

The brilliantly funny and final book in the SAM WU series, starring the bravest scaredy-cat in the world! Perfect for reluctant readers and fans of STEM, Tom Fletcher, Pamela Butchart and Sam Copeland's CHARLIE CHANGES INTO A CHICKEN Sam Wu is not afraid of many things. Definitely not ghosts, sharks, the dark, spiders or EVEN zombies! But space, well . . . When Sam gets the chance to go to Space Camp with his friends this summer, he has never been more excited. He is desperate for everyone to love it as much as he does - and together win the Space Camp Challenge trophy! But not everybody at Space Camp is ready to be a team player and for Sam it's starting to look like winning the trophy might be as difficult as landing on the moon! A wonderfully funny and reassuring read for every child staying away from home for the very first time. Common childhood fears dealt with in a hilarious, sensitive and accessible way. Also by Katie and Kevin Tsang: Sam Wu is NOT Afraid of Ghosts 9781405287517 Sam Wu is NOT Afraid of Sharks 9781405287524 Sam Wu is NOT Afraid of the Dark 9781405287531 Sam Wu is NOT Afraid of Spiders 9781405294287 Sam Wu is NOT Afraid of Zombies 9781405295727 Katie and Kevin Tsang met in in 2008 while studying at the Chinese University of Hong Kong. Since then they have lived on three different continents and travelled to over 40 countries together. They currently live in London. Kevin was born in Copenhagen and grew up in Atlanta, Georgia. Some of Sam Wu's experiences are based on Kevin's childhood (he's feeling much more confident now). Katie was born and raised in Southern California. She has previously worked at Booktrust, the UK's largest children's reading charity, and also writes YA fiction as Katherine Webber. 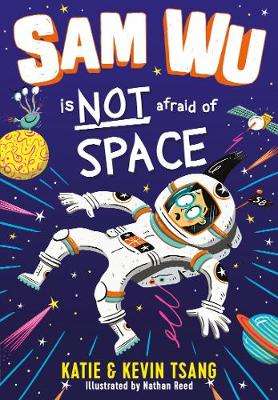 Paperback
Sam Wu is Not Afraid of Space also appears in these Categories:

5% off
The Supermarket Ghost
Gordon Snell
€7.99

Fizzlebert Stump and the Girl Who Lifted Quite Heavy Things
A. F. Harrold
€8.40

Daisy and the Trouble with Vampires
Kes Gray
€8.40

Pug Who Wanted to be a Pumpkin
Bella Swift
€7.20