Secrets in the Skies: Galileo and the Astonishing Solar System

Secrets in the Skies delves deep into the life and discoveries of the world's most famous stargazer, Galileo Galilei, and the star-studded history of astronomy, from our prehistoric ancestors to the work of today's most brilliant scientists. In this stunningly detailed visual retelling of the birth of science, the solar system is brought to life in glorious full-colour, with breathtaking illustrations by James Weston Lewis. From his early days as a young boy in Pisa, to his fiery battles with the Roman Catholic Church, readers follow the remarkable journey undertaken by Galileo in his search for truth. As the pages turn, you can witness the ancient origins of celestial examinations, Galileo's ground-breaking invention of the telescope, his controversial trials before the Inquisition, and the crucial discoveries of the stargazer's final days. Readers young and old will marvel at the beautiful and engaging artwork, and be swept away by the dramatic story behind Galileo's stellar scientific breakthroughs, richly described by author Giles Sparrow. 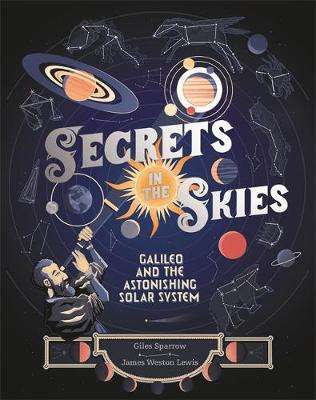 Hardback
Secrets in the Skies: Galileo and the Astonishing Solar System also appears in these Categories:

All the Science You Need to Know Before Age 7
Katie Daynes
€12.50

There's a Rang-Tan in My Bedroom
James Sellick
€8.75