This new, thoroughly updated edition of Bradt's Serbia covers all the practical information you could need plus comprehensive details of Serbian history, geography, economy, politics and people, as well as food and wine, city life, hiking and outdoors and adventure trips. Significant improvements to accommodation throughout the country over the past few years are also covered, with a wide range of options included, from five-star and boutique hotels to backpacker hostels. Bradt's Serbia also has a strong emphasis on culture and the arts - music, literature, cinema and art - and on natural history, with a thorough overview of Serbia's best wildlife sites. Serbia remains one of the least known corners of Europe although Belgrade, the capital, is becoming increasingly popular with overseas visitors, as is the second city, Novi Sad. Both are lively, cosmopolitan and welcoming cities with vibrant nightlife. In contrast, rural Serbia, with its hidden monasteries and gorgeous countryside, is an undiscovered gem. This new edition covers everything from the development of the Savamala riverfront in Belgrade to village stays, archaeological sites from the Roman era or earlier (no fewer than 18 Roman emperors were born in the territory that is now Serbia, including Constantine the Great), public transport information, the EXIT festival and Guca Trumpet Festival and, of course, the country's sporting prowess: tennis star Novak Djokovic has won 16 Grand Slam single titles, while in team sports, Serbia has excelled at water polo, basketball, volleyball and football in recent years. No matter your interest, whether it be travelling on one of the steepest climbing railway lines in the world, the Sargan Eight line, visiting one of the largest Orthodox Christian churches in the world, Belgrade's Temple of St Sava, or wandering around the National Museum or Museum of Contemporary Art, both now finally re-opened, Bradt's Serbia offers everything you need for a successful trip. 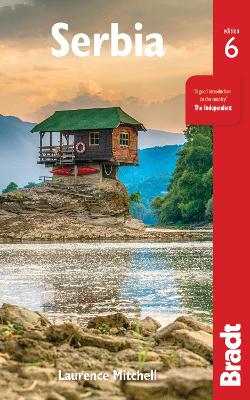 A Therapeutic Atlas
The School of Life
Hardback
€27.50