SHARDS OF A BROKEN CROWN

The demon has been defeated and the Kingdom rejoices as the threat to the existence of every living thing on Midkemia has passed, but out of the ashes of war new problems arise, in the brilliant sequel to Rage of a Demon King...Shards of a Broken Crown, Volume IV of Raymond E. Feist's Serpentwar Saga, tells the story of the survivors of the great assault on the Kingdom by the hordes of the Emerald Queen. An ambitious General has picked up the fallen reins of command and seeks to build a personal empire out of the wreckage of the Western Realm. It is up to a handful of committed men and women to oppose him. In the forefront of this conflict stand Jimmy and Dash, grandsons of the legendary Jimmy the Hand, who alongside Erik von Darkmoor and Roo Avery must contest on every hand as rival Empires seek to gain from the Empire's loss. While war rages on two borders, mysterious agencies of dark powers move behind the scenes, from the mountains to the north to the sewers under the burned-out cities of Krondor. Dark powers move, too, behind the scenes, and Pug the Magician and his allies attempt to engage and defeat them, while the Kingdom struggles to gather together the shattered pieces of the nation and forge a new future. 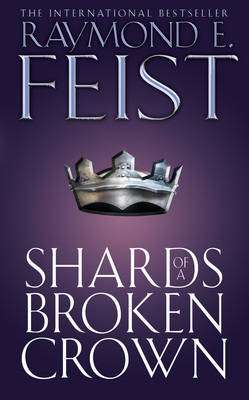 Paperback
SHARDS OF A BROKEN CROWN also appears in these Categories:

The Ocean at the End of the Lane: Illustrated Edition
Neil Gaiman
€12.20

Stories of Your Life and Others
Ted Chiang
€12.05

Stranger Things: Darkness on the Edge of Town
Adam Christopher
€10.85