Skeletons On The Zahara

The western Sahara is a baking hot and desolate place, home only to nomads and their camels, and to locusts, snails and thorny scrub. On 28 August 1815 the US brig Commerce was dashed against Mauritania's Cape Bojador and lost, although through bravery and quick thinking the ship's captain, James Riley, managed to lead all of his crew to safety. What followed was an extraordinary and desperate battle for survival in the face of human hostility, hunger, dehydration and despair, as the crew were captured, robbed and enslaved. They were reduced to drinking urine (their own and the camels'), flayed by the sun, crippled by walking miles across burning stones and sand. Over time James Riley and Sidi Hamet, slave and captor, came to recognise in each other men worthy of respect... Soon the ransom not only of Riley himself but also of a handful of his crew suddenly seemed possible. But Sidi Hamet had enemies of his own, and to reach safety the sailors had to overcome not only the desert but also the greed and anger of those who would keep them in captivity. Skeletons on the Zahara is a thrilling true story of shipwreck, adventure, and the limits of man. 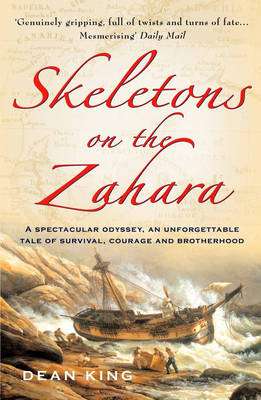 Paperback
Skeletons On The Zahara also appears in these Categories:

Lights Out, Full Throttle: The Good the Bad and the Bernie of Formula One
Damon Hill
€18.05

6% off
Me, Family and the Making of a Footballer
Jamie Redknapp
€16.99

17% off
When the World Stops Watching: Is There Life After Sport?
Damian Lawlor
€16.99

Cassius X: A Legend in the Making
Stuart Cosgrove
€21.65

Above the Clouds
Kilian Jornet
€18.05