Stop Being Reasonable: six stories of how we really change our minds

What if you aren't who you think you are? What if you don't really know the people closest to you? And what if your most deeply-held beliefs turn out to be ... wrong? In Stop Being Reasonable, philosopher and journalist Eleanor Gordon-Smith tells six lucid, gripping stories that show the limits of human reason. From the woman who realised her husband harboured a terrible secret, to the man who left the cult he had been raised in since birth, and the British reality TV contestant who, having impersonated someone else for a month, discovered he could no longer return to his former identity, all of the people interviewed radically altered their beliefs about the things that matter most. What made them change course? How should their reversals affect how we think about our own beliefs? And in an increasingly divided world, what do they teach us about how we might change the minds of others? Inspiring, perceptive, and often moving, Stop Being Reasonable explores the place where philosophy and real life meet. Ultimately, it argues that when it comes to finding out what's true or convincing others about what we know, being rational might involve our hearts as well as our minds. 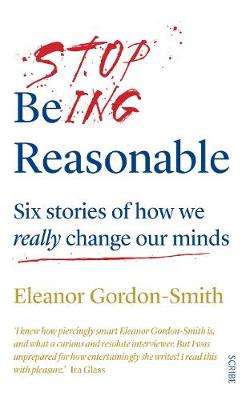 Paperback
Stop Being Reasonable: six stories of how we really change our minds also appears in these Categories: