The Biggest Bluff: How I Learned to Pay Attention, Master Myself, and Win

How a New York Times bestselling author and New Yorker contributor parlayed a strong grasp of the science of human decision-making and a woeful ignorance of cards into a life-changing run as a professional poker player, under the wing of a legend of the game Maria Konnikova had never actually played poker before and didn't even know the rules when she approached Erik Seidel - Poker Hall of Fame inductee, winner of tens of millions of dollars in earnings - and asked him to be her mentor. She had faced a stretch of personal bad luck, and her reflections on the role of chance in her life had pointed her to poker as the ultimate master class in learning to distinguish what can be controlled and what can't. Seidel was in, and soon Konnikova was down the rabbit hole with him, a journey that would lead her to the following year's World Series of Poker. Then something extraordinary happened. Under Seidel's guidance, Konnikova began to have many epiphanies about life that derived from her new pursuit, including how to better read not just her opponents but far more importantly herself. She found her way to making better decisions and to a place where she could accept luck for what it is, and what it isn't. But she also began to win. She even learned to like Las Vegas. In the end, Konnikova is a student of human behaviour, and ultimately the point of her incredible adventure was to render it into a container for its invaluable lessons. The biggest bluff of all, she learned is that skill is enough. This is a book that will focus your mind and strengthen your hand. 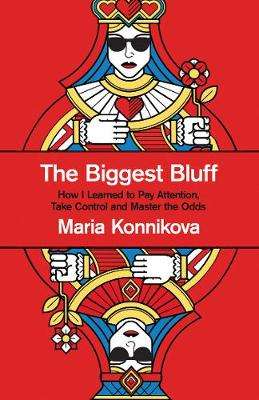 Paperback
The Biggest Bluff: How I Learned to Pay Attention, Master Myself, and Win also appears in these Categories:

Mentor to Millions: Secrets of Success in Business, Relationships, and Beyond
Harrington Kevin
€19.25

An Introduction to Improving Your Self-Esteem, 2nd Edition
Leonora Brosan
€7.20

It's Not Your Money: How to Live Fully from Divine Abundance
Tosha Silver
€15.65

Bliss Brain: The Neuroscience of Remodeling Your Brain for Resilience, Creativit
Dawson Church
€26.50

How to Be Hopeful
Bernadette Russell
€15.65

How to Be Yourself: Life-Changing Advice from a Reckless Contrarian
Simon Doonan
€11.99

The Power of Rude: A woman's guide to asserting herself
Rebecca Reid
€16.85