'The affair was weird when seen from afar, but seen in close-up, it was Kafkaesque: it was not possible in 2014 for a Boeing 777 to have simply disappeared...' A remarkable piece of investigative journalism into one of the most pervasive and troubling mysteries of recent memory. 01:20am, 8 March 2014. Malaysia Airlines Flight 370, carrying 239 passengers, disappeared into the night, never to be seen or heard from again. The incident was inexplicable. In a world defined by advanced technology and interconnectedness, how could an entire aircraft become untraceable? Had the flight been subject to a perfect hijack? Perhaps the pilots lost control? And if the plane did crash, where was the wreckage? Writing for Le Monde in the days and months after the plane's disappearance, journalist Florence de Changy closely documented the chaotic international investigation that followed, uncovering more questions than answers. Riddled with inconsistencies, contradictions and a lack of basic communication between authorities, the mystery surrounding flight MH370 only deepened. Now, de Changy offers her own explanation. Drawing together countless eyewitness testimonies, press releases, independent investigative reports and expert opinion, The Disappearing Act offers an eloquent and deeply unnerving narrative of what happened to the missing aircraft. An incredible feat of investigative journalism and a testament to de Changy's tenacity and resolve, this book is an exhaustive, gripping account into one of the most profound mysteries of the 21st century. 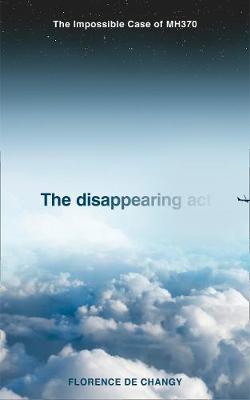 Trade Paperback
The Disappearing Act also appears in these Categories:

A Hunter-Gatherer's Guide to the 21st Century
Heather Heying
Hardback

Being a Human
Charles Foster
Hardback
€20.99

Life's Edge: The Search for What It Means to Be Alive
Carl Zimmer
Trade Paperback
€20.99

Forgetting: The Benefits of Not Remembering
Scott A. Small
Hardback
€25.90

How We Learn: The New Science of Education and the Brain
Stanislas Dehaene
Paperback
€12.35

Astrobiology: The Search for Life Elsewhere in the Universe
Rhodri Evans
Paperback
€11.25

Other Minds: The Octopus and the Evolution of Intelligent Life
Peter Godfrey-Smith
Paperback
€12.35

The Signal and the Noise: The Art and Science of Prediction
Nate Silver
Paperback
€13.55

The Brain that Changes Itself
Norman Doidge
Paperback
€13.55