THE GLOBALIST: PETER SUTHERLAND - HIS LIFE AND LEGACY

Peter Sutherland is probably the most influential Irish person ever and a key figure in world history over the past 25 years. Peter Sutherland was once described as having the best CV in the world. He was Ireland's youngest ever attorney general; the youngest ever European Commissioner; former chairman of Goldman Sachs International; former chairman of BP; UN special representative for migration and special adviser to the Vatican. His time as head of the General Agreement on Tariffs and Trade (GATT) was the high point of his career and a defining moment in modern history. He presided over the signing of the Uruguay round of multilateral trade negotiations. After eight years and much squabbling, what seemed like an impossible task in 1986 - to reach a global agreement on the removal of trade barriers and create true market liberalisation - came to pass under Sutherland's stewardship in Marrakesh on April 15th, 1994. He would go on to become the first head of the World Trade Organisation. More than any other individual he unleashed the forces of globalisation. Mickey Kantor, the US trade secretary during Bill Clinton's presidency, described him as the "father of globalisation." In an appearance before a House of Commons select committee on migration in 2012, he said countries should aim at less "homogeneity" in their populations by allowing in more migrants. This prompted a backlash against him and everything he had come to represent. In the last two years of his life, Brexit and the election of Donald Trump delivered two huge blows to the world order that Sutherland had helped to construct. THE GLOBALIST is the first in-depth biography of an international power-broker who was instrumental in shaping the global economy that we know today. 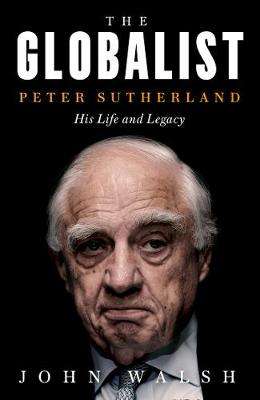 21% offHardback
THE GLOBALIST: PETER SUTHERLAND - HIS LIFE AND LEGACY also appears in these Categories:

20% off
Staring at Lakes: A Memoir of Love, Melancholy and Magical Thinking
Michael Harding
€9.00

20% off
A Listening Ear: More Stories from the Heart of Ireland
Michael Healy-Rae
€13.59

21% off
I Love the Bones of You: My Father And The Making Of Me
Christopher Eccleston
€14.80

20% off
Just One More Question: Stories from a Life in Neurology
Niall Tubridy
€9.00