The Greatest Beer Run Ever

An incredible true story of how, in 1967 - having seen students protesting against the Vietnam war - Chickie Donohue and his New York City bar friends decided that someone should go to Vietnam and take their soldier pals a beer and show them that SOMEONE appreciates what they're doing out there. It would be the Greatest Beer Run Ever! But who'd be crazy enough to do it? One man was up for the challenge: John "Chickie" Donohue. A U. S. Marine Corps veteran turned merchant mariner, Chickie decided he wasn't about to desert his buddies on the front lines when they needed him most. In THE GREATEST BEER RUN EVER, Chickie sets off on an adventure that changes his life forever. Armed with Irish luck and a backpack full of alcohol, he makes his way to Qui Nho'n, tracking down his disbelieving friends one by one. But Chickie sees more of the war than he ever bargained for, unexpectedly getting caught up for a night on the front line by the Demilitarized Zone, and in Saigon during the Tet Offensive. Donohue talks his way in and out of situations; learns a lot about himself and most importantly, changes his view on the Vietnam War, seeing first-hand the craziness of the whole endeavor and ultimately realising that the protesters were right. 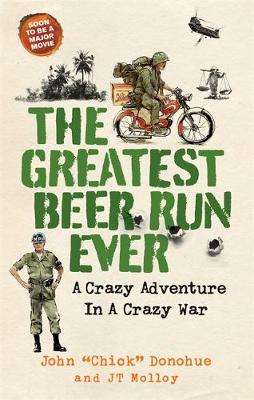 Hardback
The Greatest Beer Run Ever also appears in these Categories: